So in preparation for starting a PhD in Machine Learning/Data Science at the University of Edinburgh .

I have been watching some of the lectures on algorithms and data structures at MIT here.

One of the data structures discussed is the binary search tree (BST), and so in this post I will explain what they are and give a python implementation.

As you might expect, a BST is a way of organizing data in a binary tree. It consists of a collection of nodes, each of which has a key, corresponding to a piece of data, say an integer. Importantly the keys must be comparable, so that for any two nodes

Each node also has (at most) three pointers: parent, left child and right child.

Most importantly we have the invariant of the BST. An invariant is, of course, something that stays the same, a property that is not altered under any of the data structures allowable operations. The invariant or search property is that for any given node

all of the nodes in the left subtree rooted at

have keys less than

, and all of the nodes in the right subtree have keys greater than

Any useful data structure has operations. Some obvious things to want to do are to insert and delete. Of course in order to do these things we have to take care not to mess up the search property. To insert we begin at the root and at each stage we ask whether the key to be inserted is lesser, greater or equal to the parent, in which case we move right, left or nowhere respectively. It’s easiest just to see an example: 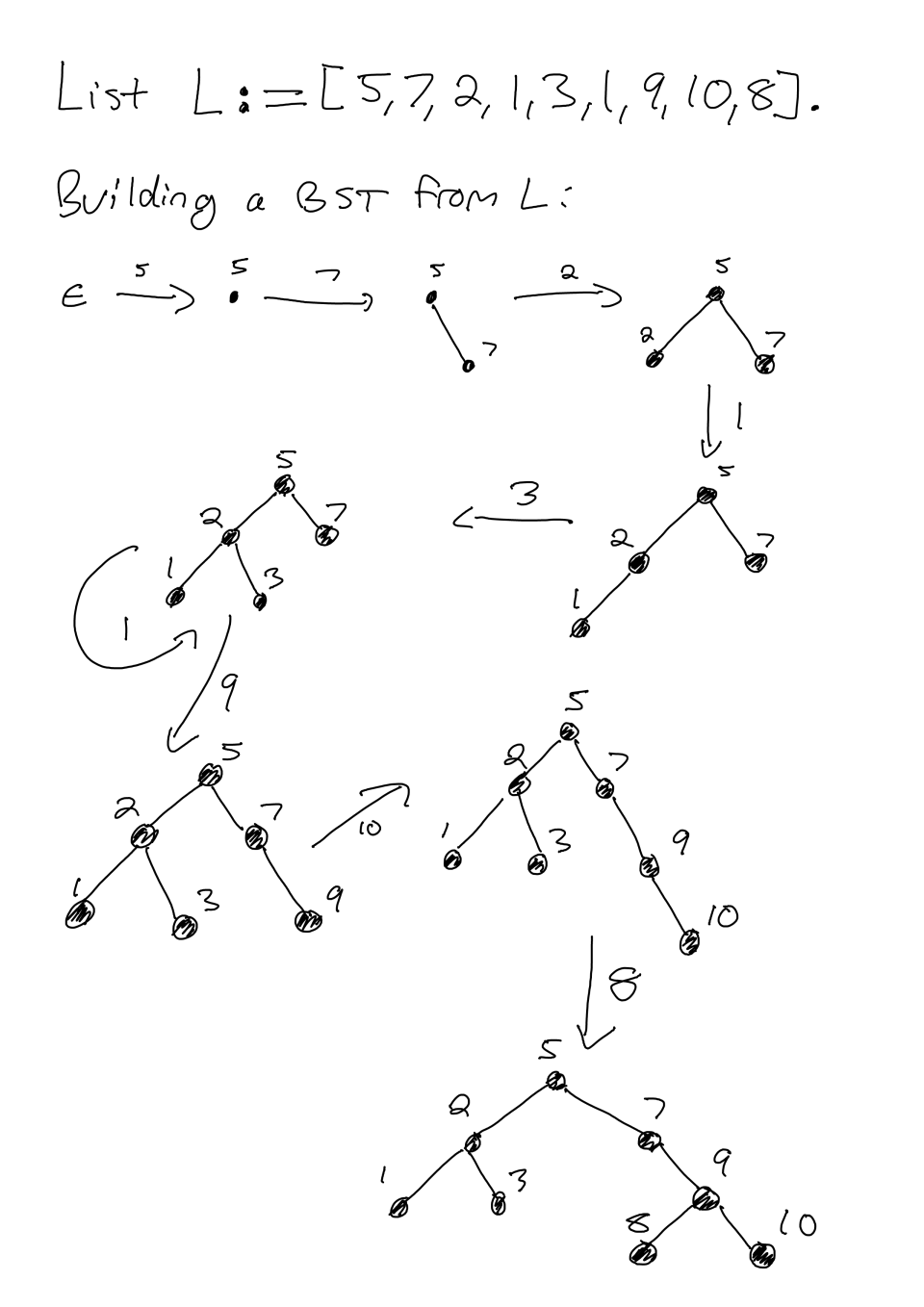 Now I think you get the idea, so let’s start coding this up. First we will make the BST node.

Next we will start making the BST. The BST remembers the root, and the pointers do the rest of the work. We begin by implementing a helpful method called ‘find’, which returns a node with a given key, or that could (but doesn’t) have a child with that key.

Using ‘find’ we can then implement ‘insert’.

So far so good!

The next thing we want to do is be able to delete keys.

If a key belongs to a leaf node then this is simple we just delete the node.

If the node has one child, then if it has a parent then when we delete the node we must connect the parent to the child of the deleted node.

If the node has two children things are a bit more tricky. If we delete the node then we break the tree. What we need to do instead is replace the node’s key with something else in the tree. What we replace it with is the rightmost node of the subtree rooted at the node’s left child, as we shall see later this is the successor of the node in the BST. The following diagram should explain:

So we swap the node’s key for this new rightmode node’s, then delete the rightmost node. Since it is rightmost it cannot have a right child, and so it is one of our base cases for the deletion operation. If this is still not clear to you, do some examples on paper and you will soon see the idea. Let’s implement this.

Ok great, we have now covered the basics of how to modify a BST. Now we want to know how to extract information from it. In particular given a key, we want to be able to find the next largest or smallest key in the BST, if any. Calling the successor (predecessor)  operation repeatedly, starting from the left(right)-most  node, will give us the sorted keys in ascending(descending) order.

. In this case we choose the left-most child of

which we will call

So in the subtree rooted at

contains all the elements in the subtree greater than

. The left-most element of the right-subtree is then the smallest element in the subtree greater than

and is a good candidate for a successor. Let’s draw a picture and try to see why this must in fact be the correct node. 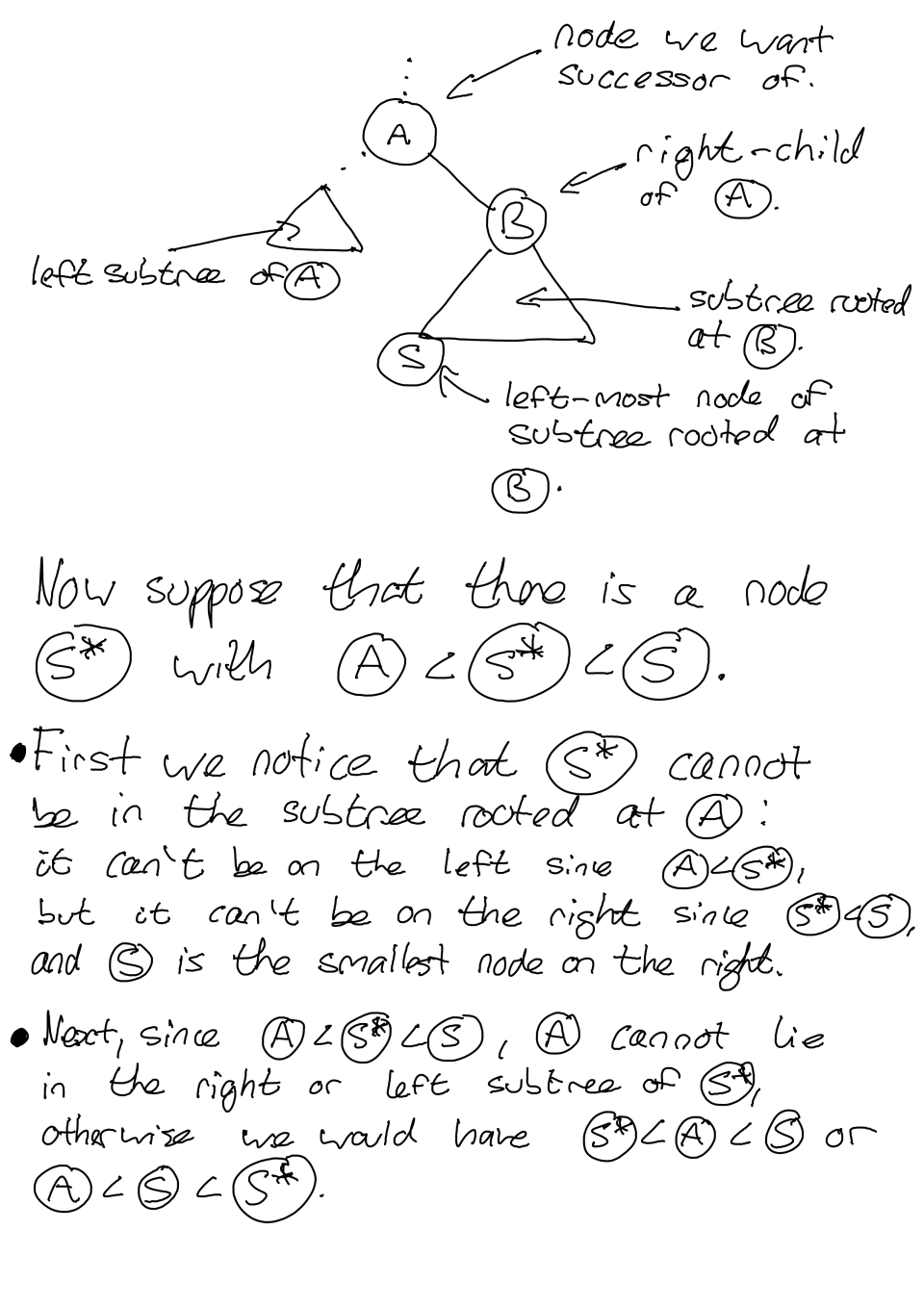 OK, but what if

has no right child? In this case we move up through the ancestors of

, searching for the first ancestor that is a left-child of its parent. If there is no such node, ie we get to the root, then

is the right-most, and hence largest, element in the tree, and has no successor. To see that this is correct employ a similar argument to the previous case.

Let’s code that up.

By now I think we deserve to see the fruits of our hard work, so let’s whip up a plotting routine using igraphs. Don’t worry about the details: since I can’t find a binary tree plotting style in igraphs, I have colored the root green, left children red and right children blue.

In order to preserve information about left and right children, the plotting routine builds the graph in igraphs using a queue.

This produced the following output: 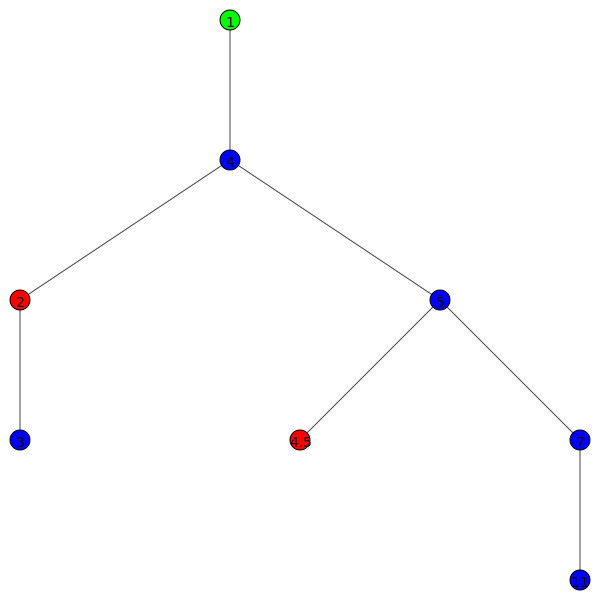 You can probably see that the operations take

is the height of the tree. This means that we can sort a length

, but if given a monotonic list we will get a linear tree with

. So next time we will see how to ‘balance’ the tree using tree rotations to achieve fast operations.

Please feel free to leave any comments, suggestions or corrections! Here is the source code.

By triangleinequality in data structures, python on July 2, 2014.
← Entropy: Expect a Surprise How to Balance your Binary Search Trees – AVL Trees →